Blaming the Jews for the Black Death Plague

When the plague hit Europe in 1348 it killed 20-25 million people, about a third of Europe’s population. For a Christian population who had already accused Jews of poisoning wells, it was natural to assume they also brought the Black Death plague.

Where Jews guilty for the Black Death?

The Black Death plague was a cataclysmic event in medieval Europe. It swept from the south and by the time it reached England it had consumed the lives of millions of people. Unable to comprehend what was causing the pestilence, the largely illiterate Christian population assumed it was the wrath of God. This population, which was already steeped in deep anti-Jewish rhetoric they heard from their priests, easily concluded that the Jews were to blame for the Black Death. After all, they already accused Jews of poisoning wells, of ritual murder, of desecrating the host, of spiritual blindness, of killing Jesus Christ, of attempting to defile the Christian mind, of being agents of the Devil and other groundless accusations that made the ordinary medieval Christian reflexively blame Jews for any problem, irrespective of how unfounded and preposterous it may be. The fact that Jews died in the Black Death as well as Christians did not deter ordinary Christians from thinking that Jews were to be blamed for it, despite the fact that Pope Clement VI pointed out this obvious fact. 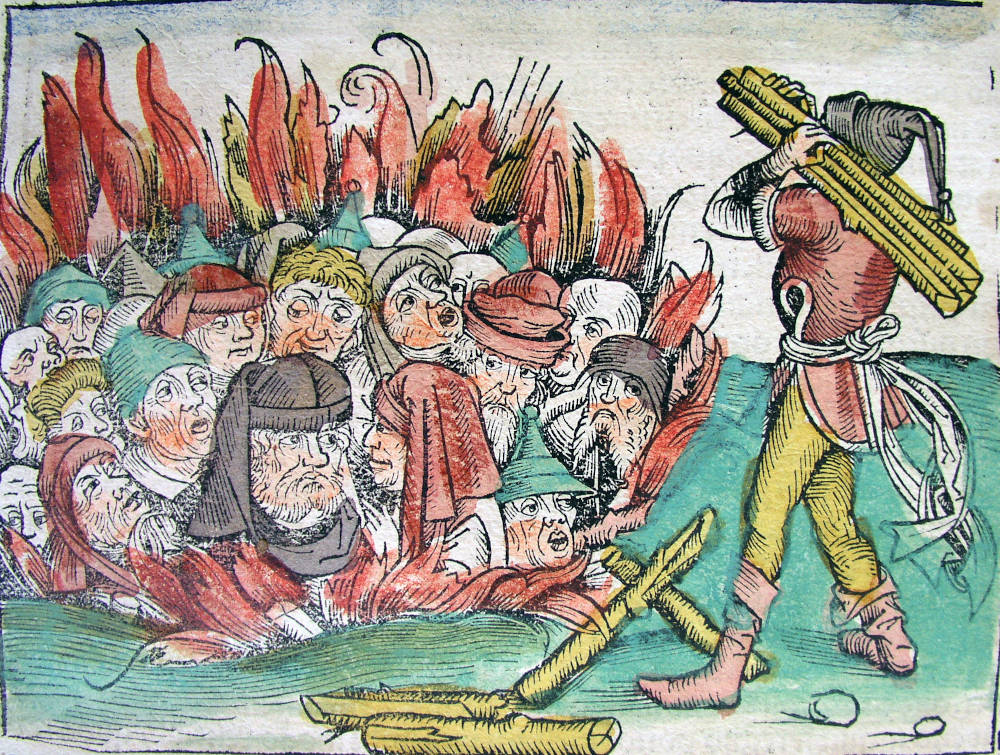 As a result of this accusation, Christians everywhere in Europe went on a murderous rampage against Jews, burning them alive wherever they found them. In August 1349, the Jewish communities of Mainz and Cologne were exterminated. In February of that same year, the citizens of Strasbourg murdered 2,000 Jews. By 1351, 60 major and 150 smaller Jewish communities had been destroyed.

← Auschwitz-Birkenau Did medieval Christians really believe the Jews were agents of the Devil? →

Want to stay informed about the topic?
Subscribe below.

The Fear to Act on Behalf of the Jews: Making the Situation Worse – Really?

Pope Pius XII and the Catholic Church, and the cohorts of church apologists today, often argued that the pope had to…

The Foundation of Antisemitism: We Want to Kill Too

Efraim Zuroff is the Director of the Israel office of the Simon Wiesenthal Center. I met him last March in his Jerusalem office and we discussed…

All possible evidence seem to point to the fact that Arab nations are indeed monolithic in pretty much everything, and have been that way for 1000 years. There is…

The Divided Nations: A Look at the United Nations

A cursory look at the history of the world reveals an unending stream of blood. The greed for power, intolerance and the utter disregard for the…

The Holocaust can be a perplexing event. After all, what could have possibly motivated and driven so many people to commit such atrocious acts, and in such numbers, as those committed…

Membership in the Nazi Party: Is that OK, Father?

Going to Mass on Sunday and Killing on Monday

During the Nazi period it was common for ordinary individuals to go about their normal lives, as their Jewish neighbors were harassed, beaten, or worse,…

For almost two thousand years Christianity taught the faithful that Christianity had superseded and replaced Judaism. It taught that God had abrogated his covenant with the…

This site uses Akismet to reduce spam. Learn how your comment data is processed.